Home » Announcements » The Promotional Campaign for Kinnow Mandarins in Malaysia & Singapore launched
A Pakistani Pavilion was setup in the thoroughfares of a shopping mall in Kuala Lumpur with backdrops depicting the Kinnow Mandarin and the Colours of Pakistan, to introduce this fruit and offer free sampling of the juice from this mandarin to the passing shoppers.

In addition a number of in-store Kinnow Juice promotions were undertaken from 7 February, 2015 in four supermarkets. The Promotional Campaign wasformally launched by H.E. Syed Hassan Raza, the High Commissioner of Pakistan in Malaysia. 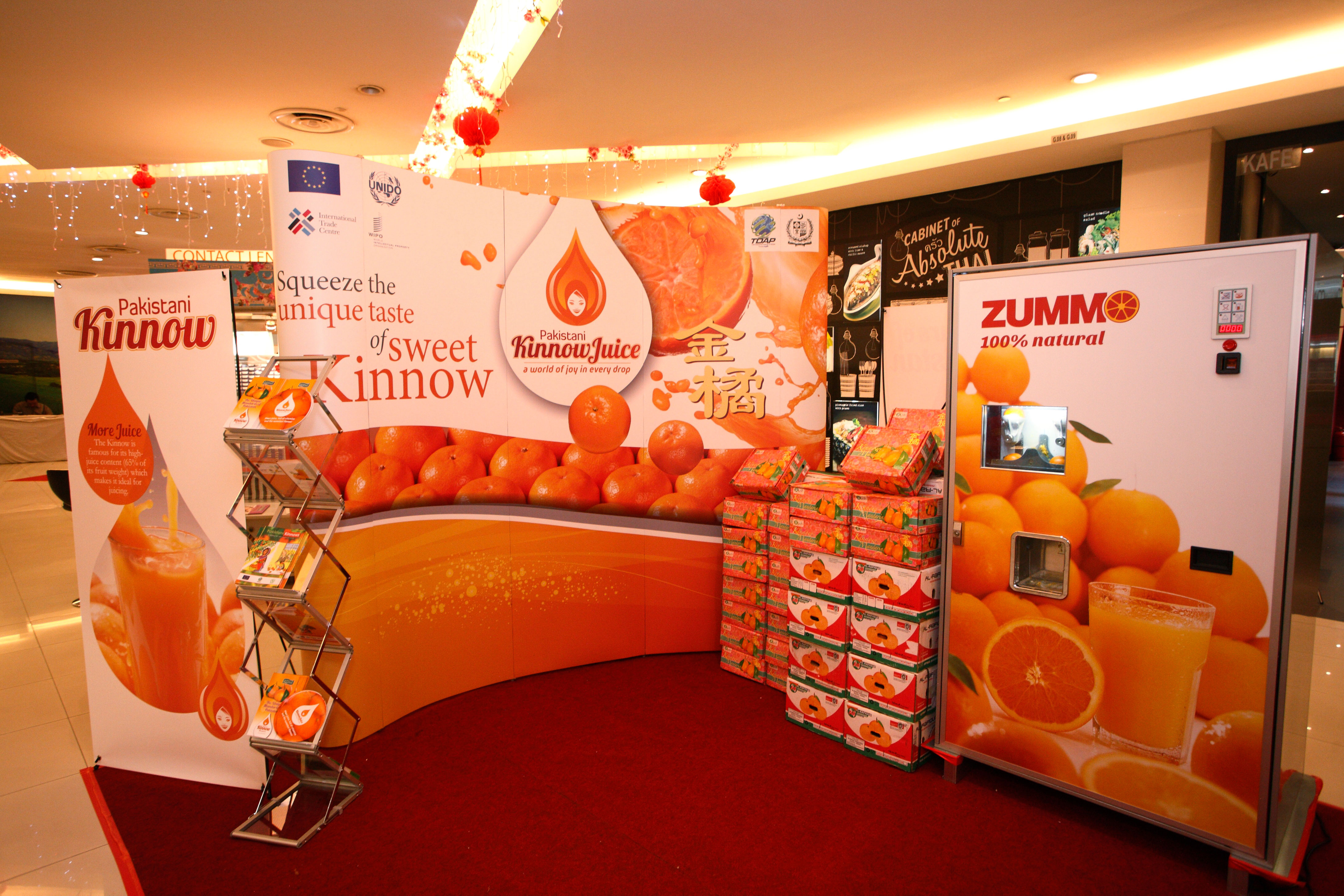 Customers witnessed the fresh Kinnow Juice being squeezed out and were impressed by the strong orange colour and the unique sweet refreshing taste which differentiates Kinnow from other varieties of the citrus family.

The classical theme of the Chinese New Year celebration (also known as the Spring Festival) is the Mandarin Orange. The Chinese name for the mandarin is ‘Kam’, a word that means gold. The presentation of this fruit as gifts to friends and relatives is considered auspicious. 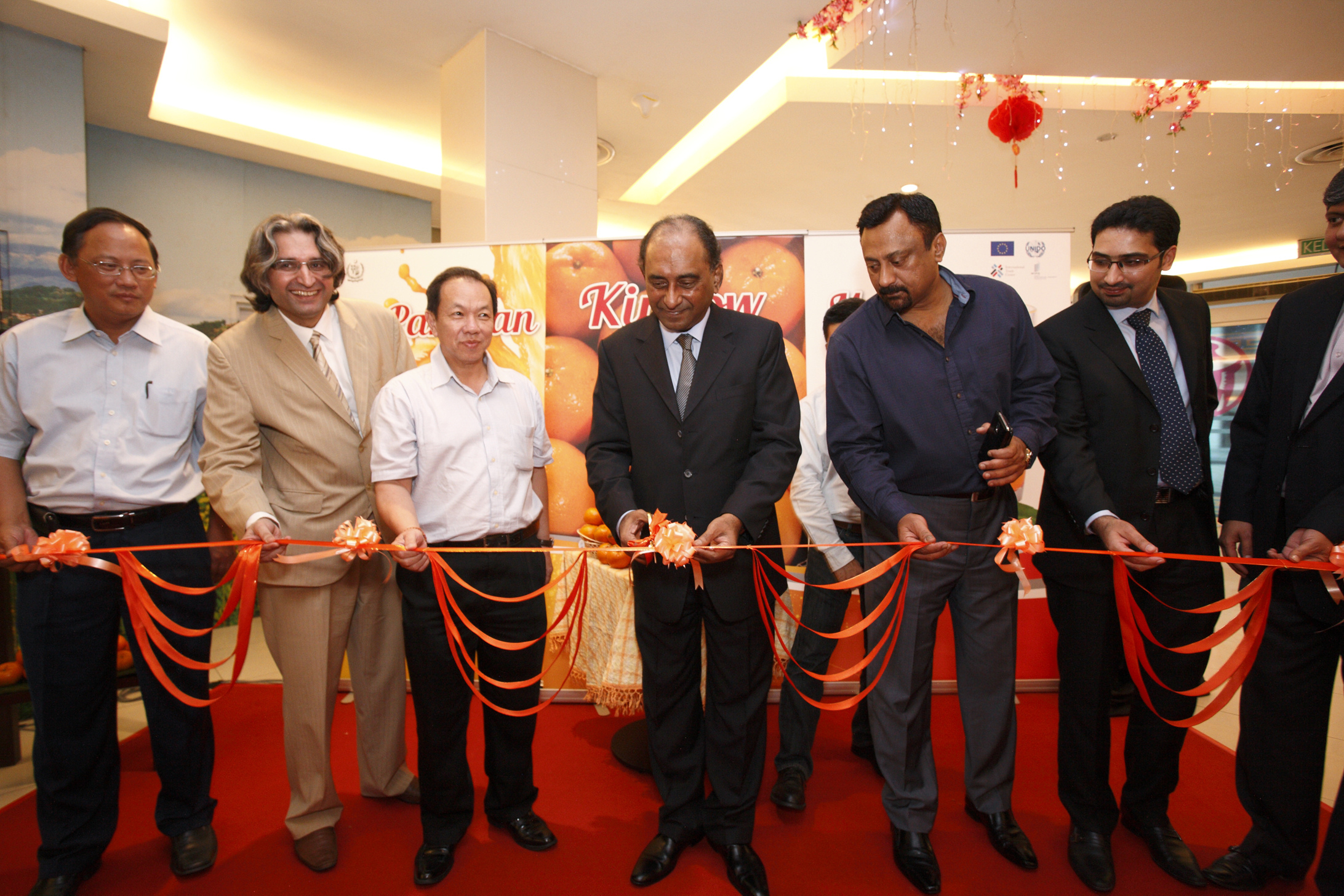 The Kinnow is in every way a “Mandarin”. In the run-up to the Chinese New Year celebration this year, the Trade Development Authority of Pakistan [TDAP] in collaboration with the European Union funded TRTA II Programme, promoted the Kinnow in Malaysia and Singapore, as the alternative Mandarin. Packed in a specifically designed box reflecting the spirit of the festivities, the Kinnow mandarins are being marketed in some of the main supermarkets in these two countries.

The aim of the exercise is to promote the name Kinnow to the masses, getting everyone to whisper the name “Kinnow” and drive thehype towards this lovely “Mandarin”.

Kinnow was introduced in the wholesale markets of South East Asian over a number of years, however this is the first time the produce has been sold directly to the high-end Supermarkets.

The current TDAP/TRTA Kinnow Promotional Campaign in Malaysia and Singapore aims at raising the level of awareness about this unique Kinnow at established retail chains. The strategic approach focused on creating a Kinnow brand amongst the consumers, emphasizing its recognition of thehigh juicing quality. This was achieved by stimulating the consumers’ interest at the major shopping malls and by offering Kinnow juice for sampling and the opportunity to purchase the fruit in the adjoining supermarkets.

This campaign has resulted in the direct delivery of Kinnow to somerenowned supermarket chains such as Aeon Big, Giant, Jaya Grocer, Village Grocer, etc.

The greatest satisfaction in this exercise is seeing the shoppers loading the Kinnow boxes in their trolleys after having been convinced that this is the “Mandarin” they should present to their friends and relatives on this Chinese New Year.

Realizing the effectiveness and results of the on-going promotion, the Purchasing Managersof otherSupermarkets who attended the launch of the Kinnow Promotional Campaign in Giza Shopping Mall, are now contacting the High Commission in Malaysia to participate in the other campaigns with the aim to stock the Kinnow in their stores.This Kinnow Promotional Campaign was planned initially for 3 days in Malaysia, but now the retailers have offered to extend this promotional campaign in their respective supermarkets for additional 2 weeks, at their own expense.