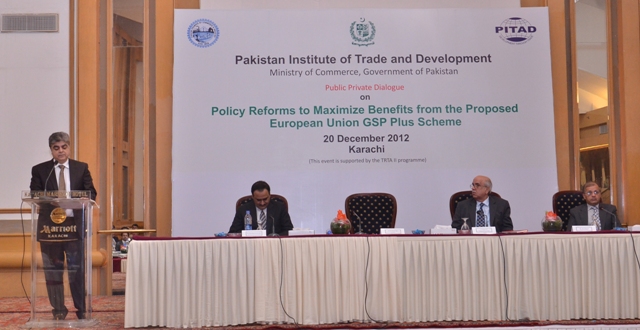 Stakeholders from public sector, private sector and civil society discussed policy recommendations and domestic regulatory reform for enhancing competitiveness and export potential to the European Union in the products where Pakistan has comparative advantage viz a viz competitors. The Public private dialogue (PPD) on ‘’ Policy Reform to Enhance Benefits from the Proposed GSP plus Scheme’’, should the GSP Plus status be granted by the EU, was organized by Pakistan Institute of Trade and Development (PITAD) Ministry of Commerce in association with the Karachi Chamber of Commerce and Industry with technical Assistance from the International Trade Centre (ITC).

A fifteen members public private dialogue steering committee (PPDSC) decided earlier this year that a PPD on sectoral analysis of the proposed GSP scheme should be conducted to identify the sectors and products where government intervention is required to enhance competitiveness so that a coherent and inclusive policy is debated and put in place for Pakistan. The Pakistan Institute of Trade and Development (PITAD) with technical assistance from International Trade Centre (ITC) have been functioning as the secretariat of the PPDSC.

European Union is the second largest export destination for Pakistan and there are some sectors in which Pakistan is enjoying a strong market share in the EU. However, there is a need to put in place a coherent policy to further enhance exports not only in those sectors but some potential sectors where EU is importing from other sources but not Pakistan; maintained Dr. Shujat Ali Secretary Industry, Commerce and Investment department Punjab. He added that there is also a need to identify specific EU regulations with respect to Sanitary and Phyto-Sanitary Measures (SPS) and other technical regulations which need to be addressed through domestic regulatory reform for compliance. He appreciated the efforts of PITAD for organizing a PPD on such important aspect of trade policy.

Mr. Muhammad Haroon Agar President Karachi Chamber of Commerce showcased the longstanding trade relations between Pakistan and the EU. He underscored that the business community needs conducive policies for trade. He highlighted that they have the capacity to compete with any country provided their genuine concerns are taken on board by the government and they are involved in the policy making process.

The technical session was undertaken wherein policy recommendation for domestic regulatory reform from a study conducted for the PPD were presented before the invited stakeholders. The technical session was chaired by Mr. Mujeeb Ahmad Khan, Head Research and Technical Aalysis section TDAP. Panel discussants from relevant private sector Associations, Chambers of Commerce and Government organizations expressed their views on the possible reform process.

Open house discussions among the invited participants also took place in which representative of Federal Government Ministries, implementing agencies, provincial departments, Chambers of Commerce, trade associations, individual firms, independent research organizations and Academia discussed the issues being faced by the selected sectors and possible policy reform to overcome them. The public private dialogue will result into concrete policy proposals for Enhancing competitiveness and export potential in identified sectors which would be formally submitted to the federal and provincial governments for potential implementation.